I am a professional artist interested to depict figurative and wildlife.

Painting and drawing are my means of expression.

Inspiration is predominantly classical but with a strong contemporary presence.

My creative approach is focused on a narrative composition based on the principles of symbolism, realism, perception, poetry, mystery, aesthetics and detail. Where the symbolism wants to evoke an intimate emotion, and arouse the interest in Nature, force that connects all living beings.

For me Nature is very important and its inspiration allows me a very complex and descriptive creativity.

Each of my creatures tells a story about presence and essence, taking shape from light and shadows, like an emotion that vibrates in a timeless space. I believe that painting and drawing are the best ways to represent this.

Over the years I have always experimented different drawing and painting techniques so obtaining the today’s ever-evolving style.

The most important thing is that, both in painting and in drawing, my work has to appear absolutely smooth and only if I want light reflections in painting, then I create an “ad hoc” material effect.

Throughout the creative phase I always dedicate a great attention to the choice of the surface’s size where my painting will come to life.

I work in my studio during the day, every day of the week  losing the notion of time…always. 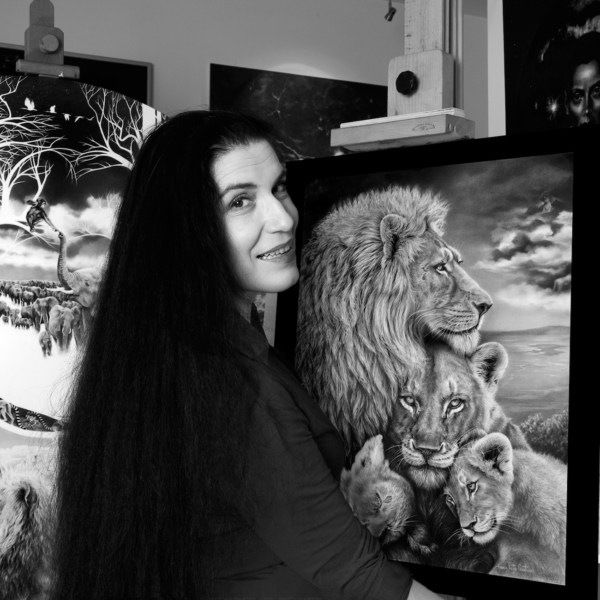 She attended the Art Institute in Orvieto her hometown, studying “Graphic arts, advertising and photography”.

After finished her studies, she has collaborated as painter and decorator for architects, as illustrator and graphic designer for Italian magazines and as visualizer for advertising agencies.

On 2008, she started with her professional fine art career focused only on Drawing and Painting. She has always had a great interest in figurative art, that now also includes her passion for wildlife.

Her drawings/paintings are in some worldwide private collections. She works and receives in her own atelier Orvieto-Italy.

This website uses cookies to improve your experience while you navigate through the website. Out of these, the cookies that are categorized as necessary are stored on your browser as they are essential for the working of basic functionalities of the website. We also use third-party cookies that help us analyze and understand how you use this website. These cookies will be stored in your browser only with your consent. You also have the option to opt-out of these cookies. But opting out of some of these cookies may affect your browsing experience.Privacy Policy
Necessary Always Enabled
Necessary cookies are absolutely essential for the website to function properly. This category only includes cookies that ensures basic functionalities and security features of the website. These cookies do not store any personal information.
Functional
Functional cookies help to perform certain functionalities like sharing the content of the website on social media platforms, collect feedbacks, and other third-party features.
Performance
Performance cookies are used to understand and analyze the key performance indexes of the website which helps in delivering a better user experience for the visitors.
Analytics
Analytical cookies are used to understand how visitors interact with the website. These cookies help provide information on metrics the number of visitors, bounce rate, traffic source, etc.
Advertisement
Advertisement cookies are used to provide visitors with relevant ads and marketing campaigns. These cookies track visitors across websites and collect information to provide customized ads.
Others
Other uncategorized cookies are those that are being analyzed and have not been classified into a category as yet.
Cookies
SAVE & ACCEPT